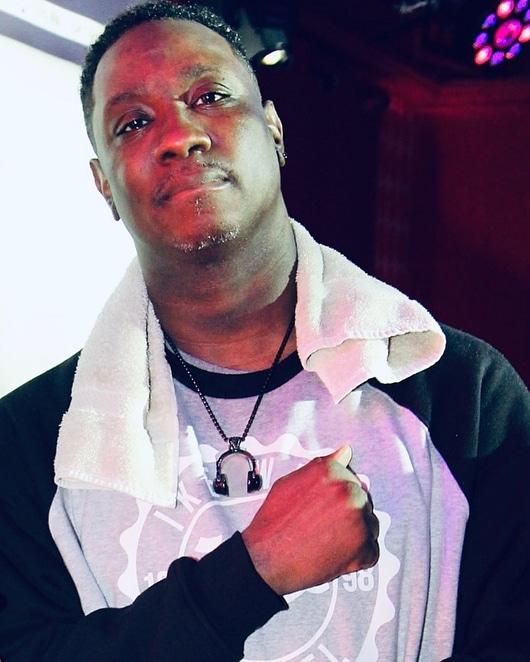 Pause For The Flick

Who Is Blakk Steel?

He got his start as a kid with dreams, hailing from the historic & very storied Hill District neighborhood of Pittsburgh, PA. Growing up on the 800 block of Francis Street, he was always surrounded by music. Whether it was in the home by a single mother to one child, or friends in the street that would bring out boomboxes, or blaring music out of the project windows, he did everything to a beat.
As a teenager, he was an aspiring rapper, who would battle on street corners, for an MC's respect. During the course of writing raps, a friend of his caught his ear, by picking up a turntable, & sounding good at scratching. From there, he decided that he wanted to be an MC'ing DJ. He began taking lessons from that friend. The friend hustled, but DJ'd as a hobby. When Blakk started college, he was a financially struggling college student, who had considered entering the dope game with his friend. His friend & mentor, handed the turntable to Steel, & told him, "Stay away from THIS game! Take this (turntable), & do something great with it. Be OUR voice in the industry!" From then on, Blakk Steel felt obligated to do just that. This was the turning point that, ultimately, save his life.
In his sophomore year at the University of Pittsburgh, he got the open door opportunity that he'd been running down since hitting campus: THE prime shift on Pitt's radio station, that was making massive noise around the Pittsburgh region: WPTS FM!! This was a position that he would hold solid for 9 years (he stuck around, after completing school). His tenure there was very storied, & he created a loud buzz for himself there (accolades from Vibe Magazine in '94 & Rap Sheet in '95, as well as Pittsburgh's City Paper in '98).
In his 2nd year there ('92), he was approached by a local, R-rated music video show, called Underground Hip-Hop Video Magazine. He joined the cast a year later ('93), & would go on to be the anchorman for the show, for 16 years. During his tenure with the radio & tv shows, he would meet, interview, & rub elbows with some of Hip-Hop's elite players (Diddy, RZA, & Jam Master Jay, just to name a few). The video show would be nominated for 6 Billboards awards, over its life span.
With college & commercial radio experience under his belt, along with a lengthy TV run, Steel would go on to DJ many major events (from amphitheaters & arenas), to many venues in & out of state, & still does it. He has since adopted the moniker, "Mr. Money Well Spent", because the people feel like they've gotten their "bang for their buck."
When he's not working, he tries to listen to his 2 favorite DJs: Jazzy Jeff, & DJ Scratch.
One question remains: Why doesn't he use the "DJ" portion of his title, on a more frequent basis? "I'm not solely a DJ. I MC, as well. I'm an entertainer, so I don't nail myself down as labeling myself as JUST a DJ."
Scroll UpScroll Up